Main challenges and opportunities of Factoring in Peru

The factoring industry took off in Peru, in practical terms, in 2016. It then began to develop strongly in this country that is suffering from a permanent political crisis (it has had five presidents in less than five years), and despite this, it is one of the most successful and stable economies in Latin America.

According to the Central Reserve Bank of Peru, in the first and second quarters of this 2022, the Peruvian economy grew by 3.8% and 3.5% respectively, compared to the same periods last year. In 2021, the country’s GDP increased by 13.2%, (although we must bear in mind that this growth is largely due to the significant drop of 11% that it experienced the previous year as a result of the impact of the pandemic). However, according to the Peruvian Factoring Association (APEFAC), Factoring represented just over 2% of said GDP, a fairly modest figure if we compare it with that of other much more mature markets such as Chile (10%) or Spain (17%). In order to approach these percentages, the factoring industry in Peru must still face great challenges.

According to the Ministry of Production of Peru (PRODUCE) and the National Institute of Statistics and ICT (INEI), there are only 2.3 million formal MyPyMEs in the country, the rest (no less than 99.6%) being informal companies. In addition, access to financing is extremely limited: it is estimated that only 6% of MSMEs have access to formal financing.

According to Ricardo Gallo, founding CEO of Inandes Factor Capital, “Unfortunately, our traditional financial sector (both from the point of view of banking entities and the capital market) is so concentrated that it takes companies almost two years before the bank offers them financial products necessary for their growth. If you add the issue of informality, you will understand that SMEs end up taking products that are not the most suitable for growth, such as credit card loans or approaching informal lenders. In this scenario, we as a Factoring industry are becoming a solution for them, offering an available and cheaper alternative in terms of financial cost; but above all much faster than the traditional sector.” However, he recognizes that informality also has its drawbacks: “when evaluating the company’s ability to pay, we do not have reliable sources of information that allow us to make good decisions and unfortunately, our legal organization, in terms of time and penalties, is very slow and very lax. The law does not favor the collection of debts, and when you achieve it, so much time has passed that the debtor company has disappeared or another institution was created. This often means that a great effort is made to obtain information from other sources and many times we have to reject operations that can be very profitable.”

The factoring market has developed very positively in the country, reaching its top volume in 2021. Here we can see the industry’s growth in the last seven years: 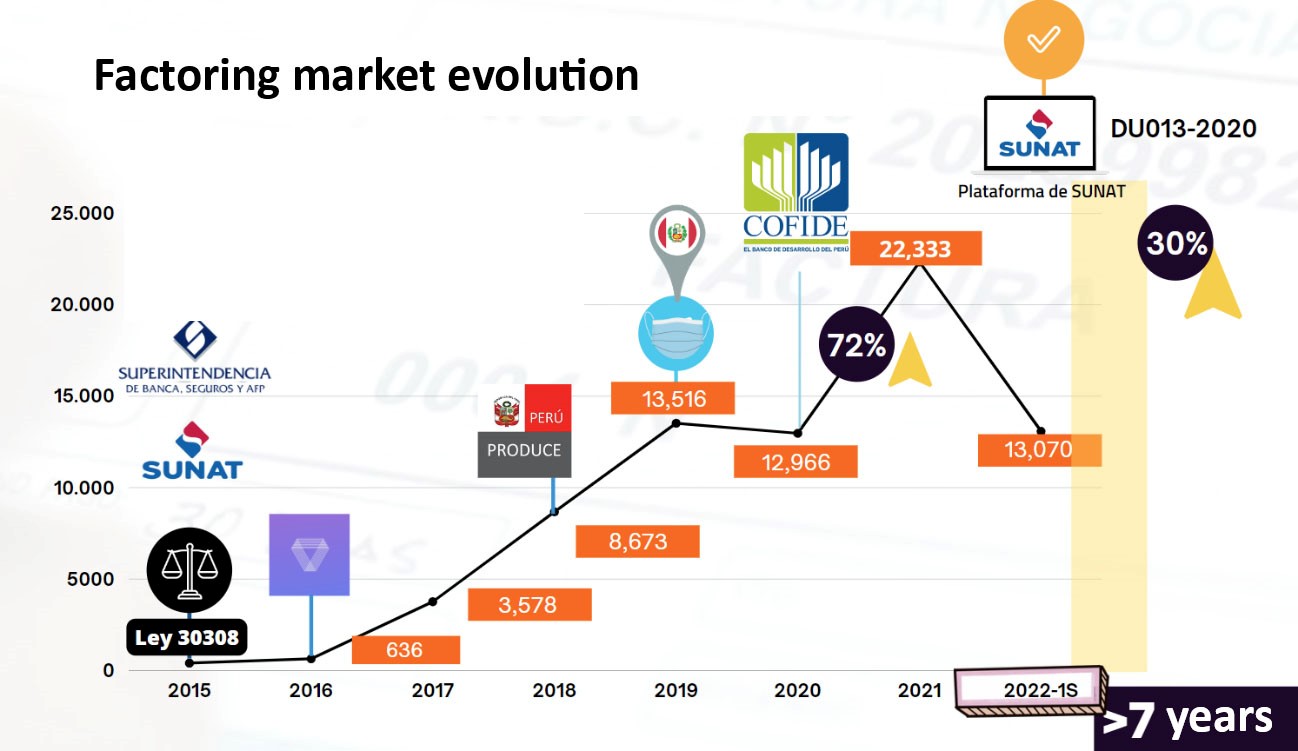 Law 30308 (Law on Factoring or Negotiable Invoices, approved in 2015) played a fundamental role in the development of the industry, which has grown exponentially since its creation, reaching 13,000 million soles (around 3,000 million dollars) in 2019. Although it is true that in 2020 the pandemic affected the sector, it recovered quickly thanks to COFIDE’s CRECER fund, which the government activated from June 2020 to June 2021. This fund guaranteed the factoring credits of Peruvian companies, making possible to serve some companies or sectors that would not have been served by other means. According to Ricardo Gallo, it covered traditional financial companies and 9 Factoring companies during the toughest stage of the pandemic. “Factoring companies had fewer incidents of use of guarantees than banks,” says Gallo, who also maintains that if this mechanism were reactivated, “it would become an excellent means of promoting the financing of factoring operations among SMEs, and therefore it would be an incentive to improve formalization.” 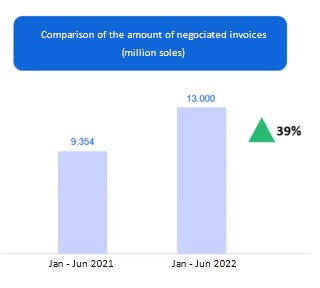 According to data from APEFAC, around 25% of Factoring operations are carried out through specialized companies and 75% through banking, where it is gradually positioning itself as a key product: “Factoring is considered a priority product for the Business Banking Division for this 2022 and 2023; the advantage we offer is the speed of evaluation and having competitive rates within the financial market, as well as personalized attention”, maintains José Carlos García, Deputy Manager of Business Banking at Banco de Comercio. He also indicates that “by 2023, we plan to double the balance of stocks placed and also double the number of customers.”

It is very important to point out that Factoring in Peru is fully digitized. CAVALI, as a Securities Clearing and Settlement Institution (ICLV), plays a fundamental role by being the articulator of Factoring in the Peruvian market through Factrack, the Centralized Registration Platform for Negotiable Invoices. This platform offers many advantages to suppliers: the commercial invoice becomes a security, that is, a negotiable invoice that gives the commercial operation greater security in the event of a possible non-payment.

In addition, all negotiable invoices registered in CAVALI through Factrack have executive merit when express or presumed compliance is obtained. This means that they can be collected quickly and with greater security with the generation of the Certificate of Registration and Ownership: this document is authorized by the Securities Law to be used as evidence in legal collection processes.

Factrack works in coordination with the National Superintendence of Customs and Tax Administration (SUNAT) and allows tracking the status of invoices. Johan Gayoso, Factoring Coordinator at EFIDE, considers the process of digitizing invoices to be crucial, which has allowed Mypes to have easier access to Factoring: “Although it is true that there are some exceptions, such as isolated cases of internet connection or the issuance of physical receipts that must have the corresponding support, the ideal scenario is that all Mypes issue electronic receipts so that they can be financed in a simple and faster way in the Factoring company of their choice, “says Gayoso.

Peru has a very favorable regulatory base to grant non-bank financial support to SMEs. Law 29623 was recently modified with the new Emergency Decree DU013-2021, which has improved the Factoring Law and offers suppliers better conditions for negotiating their invoices. According to Ricardo Gallo, this DU “has brought interesting and long-awaited changes to the industry, but its promise and scope have not been fulfilled.” Gallo explains that the decree also contemplated that the purchase orders of the State would become a title-value and therefore would be susceptible to being financed via Factoring. “Although I think it is very ambitious to reach purchase orders, the State could at least establish that invoices in which a state entity is the purchaser can be accepted on the CAVALI platform. This would allow those companies that work (suppliers) with companies or government agencies to also access financing via Factoring. There are very few Factoring companies that take the risk of negotiating with invoices from state companies, ministries or municipalities, because they do not comply with the necessary formality to demand payment. The payment regulations in the State in practice do not contemplate the transfer of the invoice and the bureaucrats (in a good way) avoid future problems and pay the supplier”, indicates Gallo. One of the key points of this Emergency Decree is the reduction of the term to confirm an invoice, which goes from 8 business days from its registration on the platform to 8 calendar days from its date of issue.

On the other hand, in 2022 debtors who obstruct the free negotiation of invoices have begun to be sanctioned. According to the Peruvian news agency Andina, Engil Perú S.A, Estilos SRL and Vita Pharma SAC were the first three companies fined “for intentionally obstructing and challenging the flow of negotiable invoices to micro and small companies (mype) seeking liquidity.” These are the first sanctions imposed since the decree that regulated the sanctioning power of the Ministry of Production (PRODUCE) for restricting said operations was published in 2017.

In addition, as of April, they are being published on the new PRODUCE platform “Pago Oportuno”, where companies that are late in paying invoices to mypes that provide them with goods and services are also recently made public. These control actions will undoubtedly provide greater security to suppliers.

After this brief analysis of the industry, we can say that Peru has great potential for factoring operations, although a series of improvements still need to be implemented. In this sense, Johan Gayoso considers that “debtors and Factoring companies must have more fluid communication, since some obstacles are usually generated between the parties in the financing process due to variations in the net amounts and/or payment dates when the invoices are issued by the Mypes, which implies that the Factoring companies have a registry of its own while the debtors have another”, he indicates. However, he understands that these cases “will cease to be generated over time, due to the recent publication of the regulation Law No. 3162, Law of payment of Mype invoices at thirty days, which regulates actions prior to the issuance of any electronic proof of credit.”

For his part, José Carlos García maintains that one of the main challenges of the industry “is the greater dissemination of the benefits/advantages of the product for SMEs, as well as the greater participation of large companies in being able to accept these financing operations from their suppliers.”

In addition, Alejandro Niquen, president of  the APEFAC, indicates that “the approval of a supreme decree is in process to cover Factoring operations in the event of non-payment” and “there is good communication with the government to improve the rules of the negotiable invoice”.

Confirming: the alchemy of continuous change

The AEF celebrates its XL General Assembly in La Coruña