Just over a year ago in April 2020, Spain was in the throes of the first wave of the pandemic and plunged into a state of economic semi-paralysis. The vast majority of companies were closed, people were working remotely and the figures for unemployment, furloughs and temporary redundancy plans were growing each day. It seemed as if, to add insult to injury, an economic virus was following in the footsteps of the coronavirus.

At that time I wrote an article for this publication about the importance of supply chain finance in times of crisis. Since that article was written we have lived through a fascinating time. It has been a complex, challenging and humbling period with the shadow of the pandemic hanging over all aspects of our lives, affecting institutions, companies and individuals in so many ways.

With the publication of the Spanish Factoring Association’s (AEF) industry figures for 2020 it is now possible to make an informed analysis of the factoring and SCF market last year.  It is also an opportunity to reflect on what has happened in the supply chain finance sector itself during the last year. What follows is my vision of the factoring and SCF market from an economic point of view and from the context of the complex and unprecedented moment in which we all find ourselves in today. 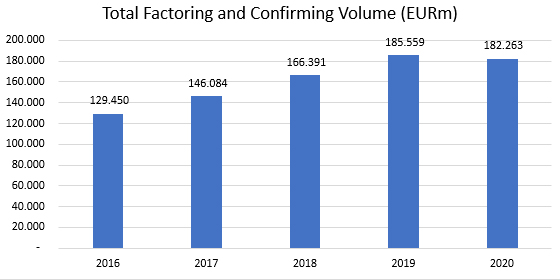 Throughout the last 12 months, it has been easy to become overwhelmed and get lost in the constant fog of negative information which surrounds us and obscures our vision. However, a detailed reading of the AEF data provides us with several interesting reflections on the situation and on the progress of this industry, and it allows us to see a tiny glimmer of light on the horizon.

Firstly, before going into the details it should be noted that the market for the assignment and financing of trade receivables, based on factoring and supply chain finance (locally known as confirming ) products in their different modalities, variables and formats, is wider than what the AEF figures show. This is because there are financial providers operating in this market who are either not associated with the AEF or they are members who have not considered it opportune to share their data.

In any case, these are ‘minor absences’ in terms of volumes and, a general estimate suggests that they barely make up five per cent of the total volume of factoring and confirming managed in the Spanish market.

Whenever we turn on the TV, open up the daily paper or look at our news feeds on the phone it seems that all the economic headlines are warning about rising unemployment, increased bankruptcies and falling expectations. However, a first reading of the factoring and SCF sector data for 2020 suggests a slightly more positive picture. While it is true that the market contracted a little, it has not been a bad year for factoring and SCF activities, given that the Spanish economy’s slowdown was so sudden and dramatic. Despite a 10 per cent plunge in Spain’s GDP, factoring and SCF activity only decreased by 1.8 per cent, which means that it grew considerably in relative terms, rising from 20.6 per cent to 22.4 per cent of GDP, if we measure all collections and intermediated payments; and from 14.9 per cent to 16.3 per cent of GDP if we measure it in terms of assignments and financing. 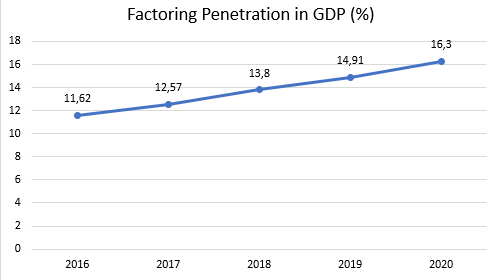 These figures indicate that the use of factoring and confirming is increasing and show a very positive growth trend. If we stop and look more closely, we can see that the relative importance of these products in our economy has increased by almost five percentage points of GDP penetration in the last four years, both in terms of assignments (from 11 to 16 per cent) and in terms of collection and payment activity (from 17 to 22 per cent).

In fact, both factoring and confirming have been showing stable and continuous growth rates of above 12 per cent in each of the three years prior to 2020. This means that factoring and confirming, already mature products, have shown resilience, strength and increasing market interest from both operators and corporate clients. This growth, at rates four times higher than the growth of Spain’s GDP (between 2017 and 2019) was, rather surprisingly, not cut short in 2020. Relatively speaking, although the growth of Spain’s GDP was negative in 2020, the 1.8 per cent drop in factoring and confirming activity compares even more favourably with the GDP in 2020 than it did in previous years.

International factoring volume in 2020 was almost at the same level as in 2019 reaching EUR 21.796bn, representing a slight decrease of 1.5 per cent. As a result of the crisis, export factoring, the main international product representing 87 per cent of the total, recorded a seven per cent decrease compared to 2019. In contrast import factoring volume recorded an eight per cent increase.

The excellent performance of confirming

If confirming and factoring together provide a glimmer of light, confirming on its own is a veritable beacon.  Confirming showed a very positive trend in the year just ended. Not only did it grow in payment orders processed (1.1 per cent), but the volume of business generated increased at a rate of nearly 5 per cent. This indicates a very important advance for this product and, in these times of crisis and economic contraction, the size of that advance is quite remarkable.

From the analysis of these figures, we can venture to draw and share some clear conclusions:

This continued expansion of confirming has meant not only that the weight of this activity is greater than that of factoring in 2020 (51.3 per cent vs. 48.7 per cent), but also that we can estimate that this product and its different modalities account for more than 37 per cent of total trade financing in Spain. This is all the more impressive if we consider that confirming is a product which did not even exist 30 years ago.

Another point of note from the figures provided by the AEF for the 2020 financial year is the evolution of investment. While current investment or total factoring and SCF investment for the year fell by five per cent in 2020 compared to the end of the previous year (around EUR 2bn less), after years of constant incremental growth (+ EUR 2bn, +EUR 3bn and +EUR 4bn, from 2017 to 2019), it is important to note that average investment grew by almost three per cent.

How can this be? How can the two indicators behave in opposite ways? There could be several reasons for this, but two stand out: on the one hand, the average term of managed payments, which is key to the business, grew by around five per cent. This seems reasonable in the difficult context of the past year where it would have taken longer to pay off credit; and on the other hand, there would have been a smaller number of one-off factoring operations carried out at the end of the year by large companies.

The estimated final balance of trade credit communicated to the Bank of Spain by the supervised institutions for the end of the year, and noted by the AEF, was EUR 39.898bn, (this is only an accurate estimate). Based on this estimate, the volume of trade credit of the banking sector at the end of the year would have fallen by 21 per cent. However, if we calculate average monthly balances and obtain a theoretical average balance of the Bank’s trade credit in 2020, we get a figure of more than EUR 41bn, which means that the real fall would have been just 11 per cent.

In considering this fall, what is truly significant and conclusive from a study of these figures is the huge decrease in what we traditionally call ‘commercial paper’ in the banking sector. If we compare the trade credit figure in the Bank of Spain’s Statistical Bulletin with the figure indicated by the AEF for factoring and SCF (noting that part of the AEF figure is also made up of the activity of non-bank operators and this, despite its insignificant impact, should be deducted), we can conclude that commercial paper activity in Spain has fallen in 2020 to almost half that of the previous year, both if we measure it by average investment balances and by nominal amount traded.

We can therefore estimate that trade credit financing in Spain fell by around 17 per cent in 2020, from a total volume traded of around EUR 310bn to EUR 260bn, with most of this fall being in commercial paper. Does this mean that the days of commercial discounting are numbered?

It is risky to make such an assertion but what we can say is that the factoring and SCF industry in Spain has become much more relevant and important in trade finance, adding real value to the market. These products are now better known, more technologically advanced and, easier to use and implement.

Finally, I cannot end this article without mentioning the smaller financial providers that are fighting hard to gain a foothold in this highly concentrated and rocky market. Fintechs, alternative providers or non-bank operators are already an important reality in our country. With a turnover that we can estimate at approximately six per cent to seven per cent of total trade financing, they are continuing along a growth path that leads me to believe that their importance will become more established in the coming years.

Although currently much smaller than the big players, these companies are agile, hungry and offer simpler solutions. As time goes on, they will no doubt quickly become more competitive and specialised, offering deeper value and real differentiation. In the meantime, the key to their positioning and success will be to continue moving forward with a firm and solid step, not to make any wrong decisions that could shake their model and to seek the help of specialist organisations where necessary. This, coupled with the drive and enthusiasm of an entrepreneurial spirit, should see these players seek out and find gaps and opportunities to exploit in every region, product and sector.

When the article on the importance of supply chain finance was written in April last year, 2020 had already given us the Australian bushfire which had further fuelled discussion on environmental change and the future of our planet. Soon after that, coronavirus hit the headlines and discussion turned into action. Despite wave after wave of the pandemic accompanied by depressing news stories about natural, human and economic tragedies hanging over us all like a dark oppressive sky, as we write today in 2021, we are starting to see evidence of a silver lining in those clouds. Nature has returned to our streets, people have come together to achieve great things and, the economy is showing signs of a recovery.

On the last day of 1665, (the year in which London was shaken by plague, losing an estimated quarter of its population,) Samuel Pepys wrote in his diary: “It is true we have gone through great melancholy… …yet, to our great joy, the town fills apace, and shops begin to be open again.” I hope that in 2021 joy will return to your town and the shops and businesses can open once again. I feel sure, based on the AEF data, that as businesses get back up to speed, SCF and factoring, which have shown such resilience and strength, will be playing an important part in the recovery, growth and advancement of the economy.

Confirming: the alchemy of continuous change

The AEF celebrates its XL General Assembly in La Coruña

The unstoppable evolution of Factoring in Colombia